Yolanda Soliz taught Spanish in the Texas public schools for 34 years (Brazosport ISD and Stafford MSD), was an adjunct faculty member of the Houston Community College for 15 years and taught  8 years at The Kinkaid School (independent) in Houston, Texas. She has taught all levels of Spanish (6-14) including AP Spanish Language and Literature, Pre-AP Spanish and Spanish for Heritage learners. Ms. Soliz has been a College Board endorsed consultant in Spanish  for 18 years and has served as a reader for both the AP Spanish Language and Literature Exams. She is a past president of Texas Foreign Language Association, served on the TFLA for 6 years and served as the president of the Houston Brazos Chapter of American Association of Teachers of Spanish and Portuguese for 15 years. She has presented AP Spanish sessions and workshops at HATFL,TFLA,SWCOLT and ACTFL Conferences and at the Colegio Internacional de Carabobo in Venezuela. She was recognized as the TFLA 2006 Spanish Teacher of the Year and in 2013 she was named the AATSP Secondary Teacher of the Year.

Ms. Soliz also served on The Pan American Student Forum Board of Directors for 15 years as both the contest and scholarship director. She graduated from Texas A&I University (Kingsville) in 1975 with a BA in Spanish and Geography ,and received an MA in Spanish from the University of Houston in 1986. 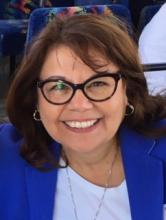